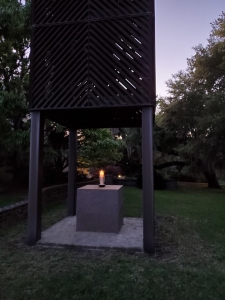 Approaching the Mepkin Abbey Church along its west side, the rolling springtime landscape of live oak trees and a variety of flowering shrubs is arrested by two clusters of identical white crosses – 28 in all – that mark the graves of those who have died here.

As a participant at the abbey’s daily Eucharist, if you find yourself facing west while standing in the semicircle around the altar, that view is refined further.  The church’s glass doors frame those live oaks in such a way that the dangling Spanish moss acts as sort of a living curtain to a mysterious upward source.

Neither is the church’s east-side entry lacking in a memorial to the dead.  It’s just not as obvious. The Mepkin bell tower, near the east entrance, surely cannot be missed, but the motive behind its dedication is more subtly nestled with a plaque near the church.  “The Tower of the Seven Spirits” honors groups with strong ties to the property over the centuries: Native Americans, African Americans, the prominent Laurens and Luce families, friends of the Abbey, and, of course, Trappist monks living and deceased.

The memorialization of the bell tower was recently taken to a new level in both human scope and richer symbolism. Our own Father Gerard Jonas had the inspired idea to continually use large segments of old Paschal candles to create an “eternal flame” within the tower for the growing number of global victims of the coronavirus pandemic. A single candle has a simple eloquence. But there’s also a kind of rocket or furnace effect when this candle and tower are considered as one.  This deceptively small flame at the base of so large a structure offers glimmering hope for a positive propellent effect for all those carried within the tower’s grateful prayer chain.

On April 2, 2020, at the end of the short evening community prayer service dedicating the flame, a lone raptor briefly circled high above the tower before heading west toward the Cooper River, and the sunset. Given its altitude and the auspicious timing, it would only be appropriate if that bird were an eagle.

In the succeeding days leading to Easter, the fruitfulness of the new candle was evident in the number of monks who walked to the tower to pray, or who even turned their heads for a lingering and presumably prayerful glance as they went about their activities.

Of course, these symbols — of light, white, and the Cross — which ring the perimeter of the Mepkin Church, find their full expression inside the Church, and especially during Holy Week, when all of the deceased, and death itself, is swallowed up in the mystery and joy of Christ’s resurrection.

As the monks settled in to the opening hymn of Easter Sunday Lauds, we sang, “Hail thee, festival day! Blest day to be hallowed forever, day when the Lord arose, breaking the kingdom of death.” It’s this belief, in all the ways we affirm it, that gives ultimate meaning to all the symbolic bearers of hope, be they lilies, candles, crosses, fonts of water and, yes, we believers ourselves.

In Chapter 4 of his Rule for monks, St. Benedict advises, “Day by day remind yourself that you are going to die.”  In marking the east and west entries to the church, the Mepkin monks are not only fulfilling the monastic founder’s advisory, but doing so in an evocative way that impels us to absorb  coronavirus death counts into a wider narrative that is ultimately consoling, life-giving and eternal.

All the World Is a Monastery Scroll to top