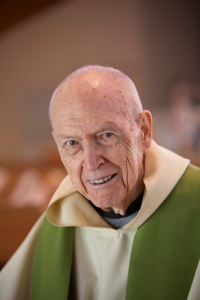 Moncks Corner, S.C. — Father Richard McGuire, O.C.S.O, age 94, died peacefully at Mepkin Abbey in the quiet of the night on the Feast of the Ascension of the Lord, May 24, 2020.

Fr. Richard entered Mepkin Abbey on January 2, 1952 and made his solemn profession on April 29, 1954. Ordained a priest on March 13, 1957, he served the community in many ways, including as Sacristan, and, for many years, he was Prior. In 1994, Fr. Richard was named Chaplain to Mepkin’s daughter house, Our Lady of Hope in Esmeraldas, Ecuador, where he served the sisters there for 25 years. He returned to Mepkin in November of 2018.

He is survived by his brother Terry McGuire, sister in law, Shirley McGuire, nephew Timothy McGuire and many cousins.

A private Mass of Christian Burial was celebrated in the Mepkin Abbey Church on May 25 with a homily given by Fr. Joseph Tedesco.

Oyster mushrooms have long been cultivated in Asia for their medical benefits as well as excellent taste, and are a rich source of B-Vitamins. Dried mushrooms have a concentrated and powerful flavor, so you need less of them per recipe.

Our dried and powdered mushrooms are available for sale in the Abbey Store and online.

We are happy to announce that beginning Tuesday, May 19 Mepkin Abbey Gardens and Gift Shop will be open Tuesday through Saturday from 9 a.m. to 4 p.m.  The monastery gates are closed to all visitors Sunday and Monday.  The front gate will be monitored to allow a few cars in at a time to preserve social distancing in the Gardens and Gift Shop.   The Gift shop will allow three persons at a time and masks will be required to enter the store.

Each car will be able to stay for one hour at the Abbey. No tours of the monastery are being given at this time.

The Monastery, Church, and Retreat Center continue to be closed to all visitors. We have taken this very difficult action on the advice of professionals in order to protect both the monks and our visitors from the COVID-19 virus. As we continue to navigate these very difficult times, please know that our friends, neighbors, benefactors and the community are in our daily prayers. If you have specific prayer requests, please send them to me at frjoetedesco@gmail.com and I will put your request on our prayer list.

While Mepkin now has only limited access to visitors, we want to support our friends and benefactors, many of whom find their horizons reduced to the confines of their living spaces, by providing some reflections and ideas to help you navigate these very trying times. The first is “Reflection on Contemplative Confinement for the Layperson.”  We add reflections on a regular basis, so, please visit our web site often.