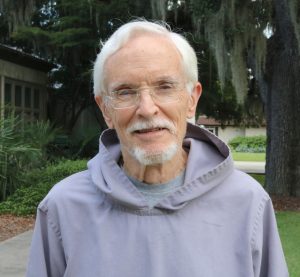 My Time at Mepkin Abbey

(Fr. Webber is a retired priest of the Episcopal Church who served congregations in the New York area and in Tokyo, Japan. He now lives in San Francisco and assists at two churches in that city. He is also an author of a number of books ranging from The Beowulf Trilogy to American to the Backbone, the biography of a fugitive slave who became a leader in the pre-Civil War abolition movement.)

When my wife died, at the end of October last year, I knew I needed to take a “time out” to re-center my life. Marriage and ministry have always defined my life and will continue to do so, but obviously in new ways. I had thought in terms of a few days at a local retreat house, but couldn’t find one that seemed available. Then I saw an advertisement in a magazine a friend passed on inviting me to be a “Monk for a Month,” at Mepkin Abbey, and I thought, “That might be just the thing.”

I wanted a change and I got it: from chilly, foggy San Francisco to semi-tropical South Carolina; from a community of over a hundred senior citizens, mostly women, centered on entertainment and physical exercises and seldom quiet, to a much smaller community of men centered on contemplation and religious exercises and almost always totally quiet except in prayer. I had considered myself an early riser, being up at 5:30, two hours before the rest of the community. Now I would be up almost three hours earlier than that if I expected to continue my usual physical exercises before the monastic day began.

But those were the obvious changes and I expected them. The devil, they say, is in the details – and even in a monastic community, the devil is hard at work. There was, of course, the challenge of finding my way around a new community: where is the Refectory, the Library, the laundry machine, an internet connection? But more challenging was finding my way around not one Prayer Book, but five, and negotiating the tiny differences between the Mepkin liturgies and the Episcopal Book of Common Prayer. Big differences might have been easier; at least I would have known I was on unfamiliar ground. But it was the little differences that caught me time and again. Even on day thirty, I caught myself saying “O God, make haste to help us” instead of “help me.” Even when all the words were the same, the commas were in different places: not “thy kingdom come, they will be done, on earth as it is in heaven” but “thy kingdom come, thy will be done on earth, as it is in heaven.” When you’ve been doing it one way for 80-plus years, it’s not easy to remember a new pattern.

But basically, the liturgy was familiar. I could become a part of it and value the structure it gave every day. Less familiar, but more important in the long run, was the “free” time, the time of silence, the time available to “commune with your own heart. . . and be still.” It took a while for me to realize that that was not something to be forced, but that I could relax and let it happen. By the end of the month, I began to feel truly caught up in the silence of the place and the community. I remembered reading a book years ago by Chaim Potok in which one of the characters said, “I’ve begun to realize that you can listen to silence and learn from it. It has a quality and a dimension all its own. It talks to me sometimes. I feel myself alive in it. It talks. And I can hear it.” By the end of the month, I had begun to experience that aspect of silence and truly to “feel myself alive in it.”