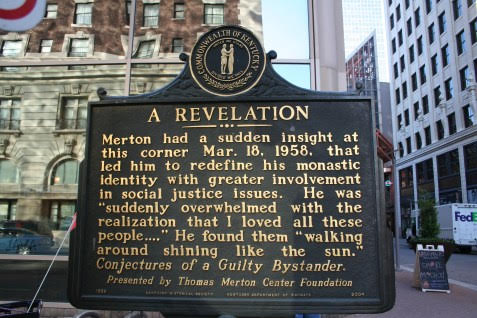 The Trappist Thomas Merton had a mystical encounter in downtown Louisville on March 18, 1958.  Part of that moment’s power is that it was seeded in the ordinary, daily urban flow that millions  experience worldwide. What bloomed for Merton, however, became an uncommon and riveting vision of a world as it can be.

Here is part of the monk’s description of what occurred in the midst of his errands for the monastery that day:

“In Louisville, at the corner of Fourth and Walnut, in the center of the shopping district, I was suddenly overwhelmed with the realization that I loved all these people, that they were mine and I theirs, that we could not be alien to one another even though we were total strangers. It was like waking from a dream of separateness, of spurious self-isolation in a special world, the world of renunciation and supposed holiness.”

His revelation struck a responsive chord; the Kentucky Historical Society even dedicated a plaque at that corner to mark Merton’s epiphany.

In these times, especially, it would be a shame to consign the Fourth and Walnut revelation to an enshrined yet entombed past.  Who cannot see, in the monk’s words “waking from a dream of separateness, of spurious self-isolation,” a reference to our own nightmarish days of quarantined separateness and pandemic-induced self-isolation?

So what might awaking from the pandemic look like?  Maybe nothing less than a concerted application of the Christian principles behind Merton’s experience, especially solidarity, to create our own “Fourth and Walnut.”

One part of Merton’s reflection on that day in Louisville can almost be read as a call to awakening and action for these days: “If only they could all see themselves as they really are. If only we could see each other that way all the time. There would be no more war, no more hatred, no more cruelty, no more greed.”

For Pope Francis, emerging from the pandemic may not be unlike the beginnings of post-resurrection life among the disciples and in the earliest Christian communities. And, like Merton, the Pope foresees a profound embodiment of commonality among people.

A week after Easter, Pope Francis wrote, “An emergency like COVID-19 is defeated in the first place with the antibodies of solidarity,” and he expressed his hope that rising again after the virus will mean that we live with “the necessary antibodies of justice, charity and solidarity.”

In the readings for the Second Sunday of Easter, we’re reminded that this vision is more than illusory.  From the account of early Christian life in the Acts of Apostles (Acts 2:42-47), we learn that “All who believed were together and had all things in common; they would sell their property and possessions and divide them among all according to each one’s need.”  From the Gospel of John (20:19-31), we realize that cowering in fear behind locked doors is not the ultimate response.  Even if we find ourselves resisting resurrected life, as with the apostle Thomas, we can quickly pivot and be emboldened in our discipleship of “my Lord and my God” who desires that “all may be one.”

No matter anyone’s physical location or the state of one’s heart, we can and must make our way to forming the new “Fourth and Walnut.”  How can we begin to act more as one?  As the coronavirus and its grip of fear begin to relent, are there faith or civic campaigns where our engagement can give real opportunity to the most vulnerable? Or perhaps, even now, may there be new responsibilities that we can undertake for and with others in the confines of our shelter-in-place radius?

The journalist George Packer made the baleful statement, “The alternative to solidarity is death,” in a recent The Atlantic essay about the pandemic and civic life in America. Thomas Merton’s Louisville vision, though less stark and threatening, is no less consequential.  The monk has invited an intense gathering at the corner of Fourth and Walnut.  How will you RSVP?

Holy Week and Easter at Mepkin