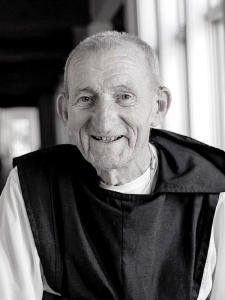 Homily for the Funeral of Brother Mary Joseph by Fr. Joe Tedesco

Brother Mary Joseph Szwedo, a monk of Mepkin Abbey, died on January 20, 2023. Born in Chicago, Illinois, Walter Szwedo entered Gethsemane Abbey in Kentucky when he was 17 years old in 1944. In 1953 he was asked to come to Mepkin Abbey because the community was struggling to establish their farming programs. Through his early years at Mepkin he contributed his many talents and skills working with the forestry efforts and sawmill, the brief effort at raising cattle (both beef and dairy) and brought his mechanical and welding aptitude to help in the garage. For an extended time he oversaw the program to feed the laying hens for Mepkin’s very successful egg industry.

Possessing a beautiful tenor voice, he sang with the monastic schola giving praise to God at all the liturgies. Devoted in honoring Mary, he was often making rosaries, some of which were sold in the monastery shop. As aging brought physical diminishment and he oculus no longer work on the farm, he continued to make rosaries even up to the week before his death.

Truly in awe of God the Creator, Brother Mary Joseph marveled at the beauty of God’s creation so evident at Mepkin. For many years he would gather the palm branches for Passion / Palm Sunday, knowing exactly where the best ones were to be found. On Holy Saturday he would carefully lay out the wood for the new fire fo the Easter Vigil sharing his years of experience with those who now have succeeded him. Daily he could be seen feeding the squirrels as he spoke with them in Polish which they obviously understood. Many monks and monastic guests learned from Brother Mary Jospeh to recognize the great number of species of birds that visit Mepkin seasonally, all looking for the food he so thoughtfully and caringly provided for God’s creatures.

Having listened in his formation as a lay brother at Gethsemane that when you are not working you are reading – scripture, theology and spiritual authors – he was an example to all the men entering Mepkin that we are as Saint Benedict tells us life long learners.

Kindly join us in thanking God for this man of deep faith who responded generously to God’s call to live a life of ceaseless prayer as a monk. He persevered for 79 years saying “yes” to God as did Mary and Joseph whose names were given to him as he took up the monastic life at Gethsemane almost 80 years ago.

A Mass of Christian Burial will be offered on Tuesday, Jan. 24, at 2 p.m. at Mepkin Abbey and Brother Mary Joseph’s body will be laid to rest in the monastic cemetery.

One Lord, One Faith, One Baptism: Reflections on the Birth of Corporate Personality...