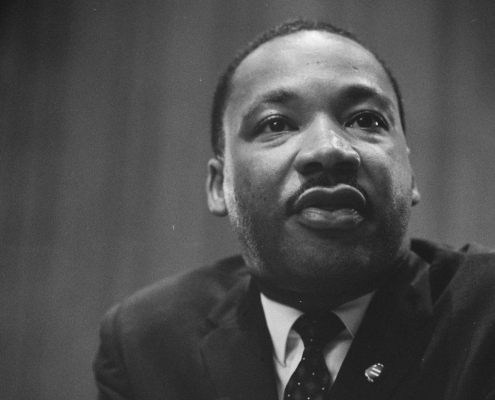 Abbot gives Chapter Talk on the anniversary of the death of Martin Luther King, Jr.

50th Anniversary of the Assassination of Martin Luther King, Jr

Wednesday (April 4) was the 50th anniversary of the assassination of Martin Luther King, Jr., in Memphis, TN.  There were several commemorations of this event, trying to evoke a new spirit of discourse, compassion and understanding in our country.  It is another kairos moment for us and, unfortunately, I do not see it being grasped.  Instead, as a country we are rattling sabers, threatening countries with oblivion and promising to call out the national guard to protect our borders with Mexico.

But we cannot be like that, my brothers.  We are here to be people of reconciliation, a place where people can feel safe, a place where people can know the grace of God and the love and care God has for each one of us.  I was present at an inurnment in our Columbarium yesterday and another today.  Very different from each other.  On Friday, Wes Blanchard was inurned.  He had been the head of the Emergency Response for Berkeley County under Supervisor Jim Rozier.  I was asked to bless the niche at the beginning of the service and then their pastor did the rest of it, including about a 30-minute homily!!  Afterwards, I went up to his widow and from her seat on her walker, she held my face in her hands and told me why she wanted me there.  Wes was born a Catholic, had gone to Catholic school throughout his young life and she wanted me to bless his niche and wanted me to know that is why.  Death often brings us back to our roots.  And Mepkin offers this place of grace and compassion to everyone who comes on this property and they know and experience this.  Today, I inurned a lady from Edgewood, SC, near Aiken.  It was unclear if she had any great religious faith.  None of the people who spoke mentioned this.  But she loved nature and all of God’s creatures and walked morally all her life.  I was able to comfort them with the reality that Mepkin is a praying community, that this is not your ordinary cemetery, but a place of prayer and love and devotion to God and to Christ, a place where their mother and grandmother and great-grandmother would be remembered before the Lord.

Finally, because I went over to today’s inurnment a bit early, I met, by chance — if we can call it that — a young family who was here for the first time and who lives in the Dunes West area of Mount Pleasant.  Vibrant Christians.  The two children, Emilia and Sarah, are seven and nine.  The seven-year-old had been climbing up into the seat of the flight into Egypt and was now walking around on the grass.  She came right over to me in the golf cart, with her older sister in tow, and asked me my name.  After proper introductions I asked if they wanted to ride and drive the golf cart (their parents were walking toward us at that point).  I had each one of them drive for a bit.  While the older one was driving, the younger one was in the back seat and announced with great gusto: I love Jesus!  I said I did too!  After the inurnment, I ended up bringing them up to church and speaking with them for some time.  When they left they could not have been more grateful and how much this all meant to them.  The parents are finding it hard to raise young children in the world in which we live, where even some kindergarten kids have cell phones with internet access!!  But their time at Mepkin has reignited their faith in humanity and given them a new hope for the future.

Why do I mention all this?  These are stories many of us can echo with chance meetings with guests or retreatants or when we come across people in the grocery store or airports or elsewhere.  I mention them because I believe it is important to keep perspective amid the bad news that the media continually feeds us and where rational political discourse seems to be at such a premium.  A strident voice does not befit a monk, it seems to me, and the 50th anniversary of the death of Martin Luther King, Jr. calls us to remember the compassion and understanding he tried to lend to the divisions he faced in his time.  I was reminded of the intervention of Robert Kennedy, running for the Democratic nomination of President at the time, made in Indianapolis on the night King was slain.  He was there to give some speeches for his campaign when the assassination occurred.  He was warned not to go into the heart of the African-American section of town because the police could not guarantee his safety.  He went anyhow, standing on the flatbed of a truck and delivering one of the greatest political speeches of our country.  It was under five minutes, in a time of national crisis, and captured the ways we could take as a country.  His words are of moment today as on the day he spoke them.  They encapsulate, I believe, what Mepkin stands for and the face we must constantly show forth to those who come here.  Here are his words.

(Note: The following text is taken from a news release version of Robert F. Kennedy’s statement. For more information please contact Kennedy.Library@nara.gov or 617.514.1629.

I have bad news for you, for all of our fellow citizens, and people who love peace all over the world, and that is that Martin Luther King was shot and killed tonight.

Martin Luther King dedicated his life to love and to justice for his fellow human beings, and he died because of that effort.

In this difficult day, in this difficult time for the United States, it is perhaps well to ask what kind of a nation we are and what direction we want to move in. For those of you who are black–considering the evidence there evidently is that there were white people who were responsible–you can be filled with bitterness, with hatred, and a desire for revenge. We can move in that direction as a country, in great polarization–black people amongst black, white people amongst white, filled with hatred toward one another.

Or we can make an effort, as Martin Luther King did, to understand and to comprehend, and to replace that violence, that stain of bloodshed that has spread across our land, with an effort to understand with compassion and love.

For those of you who are black and are tempted to be filled with hatred and distrust at the injustice of such an act, against all white people, I can only say that I feel in my own heart the same kind of feeling. I had a member of my family killed, but he was killed by a white man. But we have to make an effort in the United States, we have to make an effort to understand, to go beyond these rather difficult times.

My favorite poet was Aeschylus. He wrote: “In our sleep, pain which cannot forget falls drop by drop upon the heart until, in our own despair, against our will, comes wisdom through the awful grace of God.”

Let us dedicate ourselves to what the Greeks wrote so many years ago: to tame the savageness of man and make gentle the life of this world.

Let us dedicate ourselves to that, and say a prayer for our country and for our people.

My brothers, our country and our world need our prayer and our presence so badly.  As we celebrate Mercy Sunday, let us dedicate ourselves anew to taming the savageness of our human condition and to living gently with one another and with all who come here.  We have been given great mercy in our life, our faith and our vocation.  Let us be grateful and let us share that mercy freely.  And as I told the children today, when we fail, let us return to Jesus and know that he is always there to welcome us with open arms.