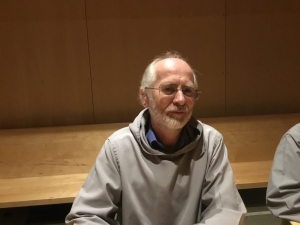 On the banks of the Cooper River just a few miles west of Charleston, South Carolina, and occupying the lands of an old plantation, stands the modern Cistercian Abbey of Mepkin. The situation and the grounds are delightful, and ancient live oaks, festooned with Spanish moss, are to be seen everywhere. A more perfect place for the secluded peace and prayerful meditation of a monastery would be hard to find. Even the natural dangers – alligators and the occasional snake – add rather to the charm and the naturalness of the place than take away from it.

The monastery is unassuming in style but well-appointed and welcoming. Apart from the Church and monastic quarters, there is an extensive library and delightful guest quarters, which latter are much frequented.

The monastic community is a mix of old, not so old, and young, and while not overflowing in numbers, seems to be holding its own. More relevantly, the community provides many opportunities for people of all faiths to spend time sharing the life of the Abbey, either as guests in the guest buildings or as temporary residents (of a month or even of a year) in the monastic quarters.

The chief occupation of the monks, apart from prayer and liturgy, is growing mushrooms, though there is plenty of scope on the property for more varied growth (corn and cotton both flourish there). Life as a monastic guest is marked by a steady round of liturgical and private prayer, tending the mushrooms, and doing odd chores about the buildings and grounds. It is an altogether steady and recollected life, with few variations. The point of monastic life anyway, one assumes, is less what is done than the charity with which it is done: to love God and neighbor in a place set apart and to be available for visitors as well as brother monks. And indeed the monks are so available, as I directly experienced, since several of them I spent time with consulting and listening, much to my profit.

Guests like myself, who stay for a few weeks (rather than a weekend), live with the monks in monastic quarters, sharing meals and timetable in all things with them. But what stand out as marking the whole experience are the twin activities: prayer, or the work of God, and labor, the work of the monastery whence it makes a living. The former is first in time and in importance, and follows forms and patterns well established for centuries in the Church, both East and West. It revolves around the Psalms, several of which are sung or recited each day.

For an outsider who comes as longer-term guest, the experience can be a challenge as well as a peaceful time apart. The recital and singing of psalms and prayers and hymns seven times a day can seem overwhelming in its repetition (not to mention its beginning at 4am in the morning), and puzzling in its multiplication of words. Would not fewer psalms and prayers, carefully focused on at fewer intervals, lead to a deeper spiritual appreciation of what is being said? How can one keep the message and meaning of so many words coming at one on so many occasions?

Speaking for myself after the experience, I would have to say that the words in the liturgical office and their multiplication are not the point. What they open up seems to be the point. They are (to repeat a hackneyed phrase) rather the medium than the message. The medium may be words and musical sounds, but the message is wordless and soundless. For the message is the messenger who sends the words, and the messenger, primarily and ultimately, is not the human author but the divine author – the ineffable and invisible God. If the aim of the monastic round is contemplation, and if contemplation is encountering God in an experience that is pure gift and in no way earned or produced by us, what more can we do than prepare ourselves for the gift? A gift cannot be commanded, either in kind or occasion; it can only be received. But how does one receive even what is given if one is not open to the gift, if other and lesser preoccupations and interests are forever diverting one’s attention? Receiving the gift presupposes recollection; recollection presupposes collection, or the bringing oneself together in calm repose and receptivity. The liturgical and laboring round of monastic life provides space for such a self-collecting.

Or so it seems to a mere and temporary guest as myself (though one who has had experience of stays at several monasteries over the years). For I can make little sense of the monastic round if the words and the singing and the liturgical and physical activity are the point of it and not rather the preparation for something more than it – something ineffably and inactively more.

The above words are my own but the thought is not my own. It is rather what I have gleaned, how accurately I dare not say, from some of the writings of Thomas Merton on the subject of contemplation.

But let this report on my experience, this record of my Mepkin days, suffice. For to add more words in explication of something that seems beyond words looks to be folly. Indeed, if the fool has said in his heart that there is no God, perhaps his folly is less in what he says (though that is folly enough) than in his saying it: one cannot say the ineffable; one cannot say God; one can only experience him, and not by one’s own efforts either but by his concession.

I can’t say I achieved much of the deeper reality of this experience while at Mepkin – distractions were too many (and my time was cut short by a week because of a funeral I wanted to attend of a monk I knew at another abbey). But I think I was beginning to get something of the hang of it towards the end – amidst the oaks, the Spanish moss, the river, the humming birds, the alligators, and yes, even the snakes.