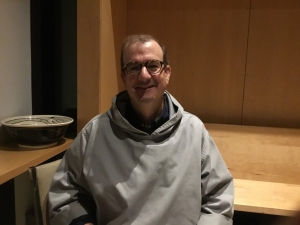 You yourselves know, brothers and sisters,
that our reception among you was not without effect.
(1 Thes 2:1)

This is the season of modest experimentation at Mepkin Abbey. The kick-off for Vigils has been moved to 4:00 a.m.  Wednesday is now a non-working day, allowing more hours for prayer and reflection. For a six-month period earlier this year, the monks conversed with each other during Monday lunch, but the community eventually decided to revert to lunchtime silence.

I was privileged to participate in the first crack at another innovation during my return visit to Mepkin in August: an early morning session of lectio divina for the Monastic Guests, hosted by Fr. Guerric and Fr. Columba. The source for our reflection was Paul’s first letter to the Thessalonians; the word that I chose from the text for meditation was “reception.” In the passage, Paul intimates that he had been roughed up during his visit to Philippi, but things were different in Thessaly. He got a better reception.

While reflecting on “receptiop,” my thoughts launched unexpectedly into an Ignatian visualization. There I was in the room with Paul and the Thessalonians, and I was amazed by what I observed.  Instead of a docile audience gathered around Paul, quietly absorbing his teachings, my mind conceived a rowdy and raucous atmosphere, with boisterous disputation, interruption, chatter, laughter. The scene was non-monastic, to say the least.

But my visualization of the room in Thessaly also had a second and more powerful facet. As things were breaking up in the wee hours of the morning, in my mind’s eye I managed to pull Paul aside for a quick chat, to ask him for a clarification, or an elaboration. This felt altogether monastic. One of the great gifts of my two tenures at Mepkin has been the opportunity to meet periodically with members and residents of the community and to discuss things that matter.

Mepkin Abbey has become an anchor in my life, and in my daily life, it is a consolation to be able to visualize and reflect upon what is happening at the abbey at any hour of any day. And, so I look forward to my next return to Mepkin, and to observing what new experiments are underway.  And I pray that, as before, my reception will “not be without effect.”