Blog
You are here: Home1 / Blog2 / Covid-193 / Mushrooms Are Us! Mycelial Possibilities for Monasteries and Pandemics 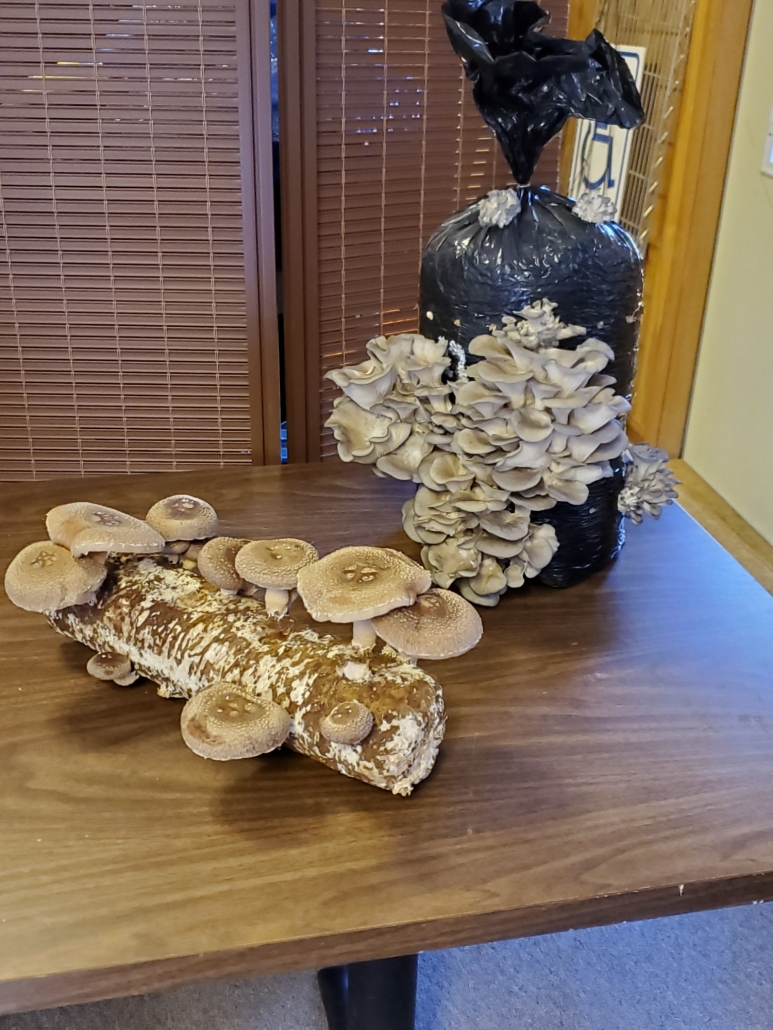 (First of a two-part series)

It’s May 18.  I haven’t had a conversation with Father Columba here at the Abbey since April 14.  Even then, we only had the chance to speak at length while riding a motorized cart to our work assignment that afternoon, picking up tree debris after a severe thunderstorm ripped through the property the previous day. (Sadly, that storm spawned a homewrecking tornado across the river in downtown Moncks Corner).

The thing about community life with the Trappists, as I’m understanding it, is that it’s less akin to the kind of everyday relating that occurs with spouses, friends or work colleagues, and more like what happens with total strangers who, for example, suddenly find themselves on a turbulent flight or a gripping sporting event or awe-inspiring concert. The common collective experience overpowers everything else.  One relates primarily – and intensely — to that flight, game or concert, and the attentiveness generates a profound witnessing.

You are fully present, period, and that presence, particularly if it engages the senses along with mind, heart and spirit, gives you a greater poise and spaciousness to the person sitting next to you, for example.  And if the other person is similarly engaged, the experience can be enhanced all the more.  These kinds of experiences, which catch you deeply in a moment, can actually be quite contemplative.

At the monastery, the goal is for the intense experience to be ongoing. We all participate together in the vast majority of our approximately 17 waking hours.  (Those currently under one roof in a pandemic shelter-in-place may begin to relate to this.) Here, though, all of us and all of our day is directed to a common, deeper pursuit of the heart of God, through prayer, Scripture (especially the Psalms) the Eucharist, meals, work, classes and talks.  The atmosphere is imbued with the great themes of creation, incarnation, paschal mystery, resurrection, as well as the lived experience of the monks within these themes.

Covid-19 has prompted a temporary cessation of one of our Abbey’s primary means of sustenance: the production of oyster and shiitake mushrooms that we sell to restaurants, grocery stores and to individual consumers in the Charleston area.  However, we can still view the world of mushrooms as a metaphor for the connectedness of monastic life.  Sometimes I even look at our speckled granite altar in the Mepkin church – the central image in the church – and see a resemblance to the appearance of the log-like shiitake substrates out of which the mushrooms grow in our farm.

You could, for example, say that the monastic structure is itself a kind of “substrate” – a package of raw materials assembled in such a way so that something can grow from it.  Spawn, a sort of mushroom “seed” injected into the substrate, creates mycelium, a network of growth from which mushrooms fruit. For us, these “spawn” can take a variety of forms: various Scripture passages, silence itself, a walk in nature, and so forth.

In the natural setting of the forest, the mycelium provides nutrients for trees and plants even before mushrooms appear. So, too, the prayer, work and community life create a mycelial network that keeps the monastery running even without dramatic fruits.

There’s been difficulty with tending mushrooms at a grand business scale. It was only in the mid-19th century that the mushroom industry really took root in the United States. Previously, if you wanted to eat mushrooms, you had to forage for them in a wooded area.  Profit margins are still low for the vast majority of mushroom growers, especially so during the pandemic when mushrooms are not considered a food staple.

Although we have a much longer historical run cultivating communities than mushrooms, the pandemic crisis has pointed out how, in some important ways, society may have now regressed, and we are again foraging at building community. We are fighting off the wild beasts of selfishness and narcissism, and there are concerns about leadership at multiple levels, and our ability to rally communities around a common purpose. Tending to community, as in tending to mushrooms, is a fragile art that can’t be taken for granted.

Mushroom spores become airborne as part of their life cycle. In our enclosed monastic mycelium, there are likewise spiritual “spores” released into the community to linger for later fruitfulness. These can take the form of a homily, a chapter talk, or a simple interaction, to name just a few. Community connections continue even through these moments; we don’t depend on random motorized cart conversations to forge ties.  For example, earlier this month, and a few website posts back, Fr. Columba offered a reflection entitled, “The Church After The Pandemic: Prophetic and Contemplative,”  that in turn prompted some thoughts of my own about prophetic and contemplative initiatives in a post-pandemic church, which I will share in the next post.

Goaltenders in an Uncertain Contest