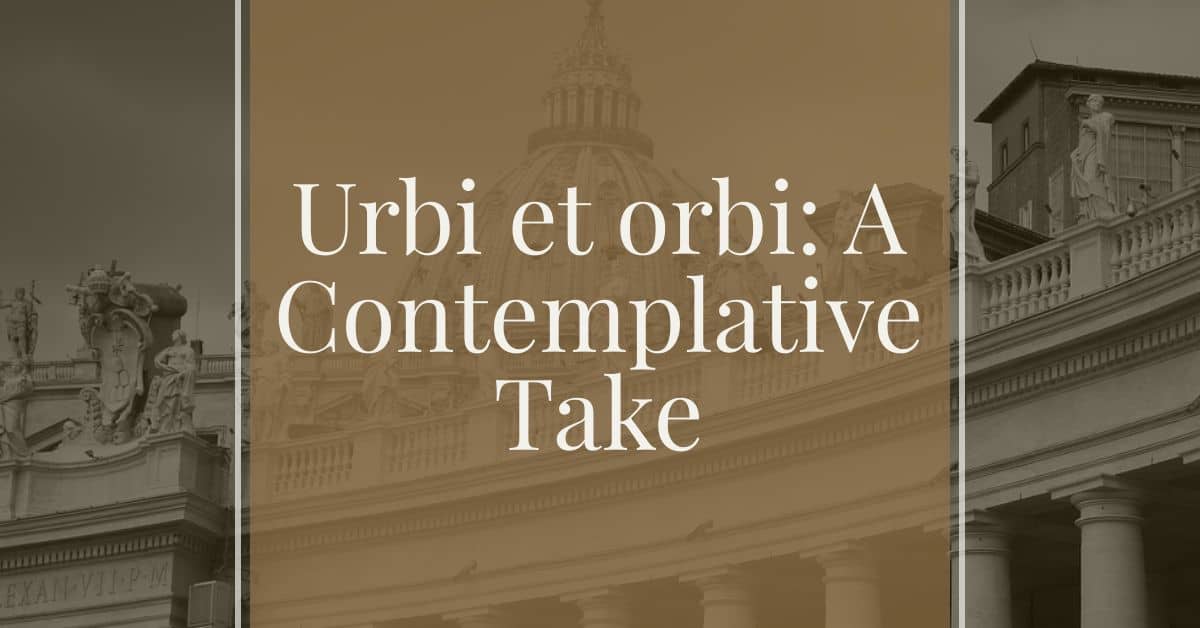 It’s a big deal when a television or a live-streaming broadcast is turned on in a Trappist monastery.

For example, when the Trappists at Gethsemani Abbey in Kentucky watched televised news of the Sept. 11, 2001 terrorist attacks in their monastic infirmary, The New York Times found it worthy of a feature story soon thereafter. Until Sept. 11, the monks had not turned that television on for the Vietnam War, the Kennedy assassination or other major horrors over the preceding decades.

Such is the gravity of the deadly COVID-19 pandemic that on March 27, 2020, Fr. Joe Tedesco, superior of Mepkin Abbey, called his monks together in the library to view the live transmission of Pope Francis’ extraordinary Urbi et Orbi blessing from St. Peter’s Square.

As the powerful hour-long prayer service unfolded, it became apparent that this was no usual Vatican event.  Despite not watching TV nor participating in Vatican liturgies, it was easy for the monks to be at home with much of what was seen and heard, starting with the liturgical space.

A desolate, minimalist St. Peter’s Square might strike many as a ghastly and foreboding sign of the pandemic’s impact. Yet in that profound emptiness, a monk can resonate with spaciousness intentionally designed into many monastery chapels.  The physical emptiness represents and assists a sought-for movement of one’s spirit toward self-emptying. within which it is believed a soul is disposed for God’s work in shaping the true self.

In St. Peter’s Square, and also in keeping with a monastery’s stark, purposeful look, were a minimum of items to inhabit the space. The most important were selected with pinpoint accuracy to the moment and function at hand.  There was a crucifix positioned in the square which dated to the 15th century and was carried throughout the streets of Rome in 1522 during a plague.   The icon of Mary selected for the service is one of the oldest in use. Known as “Protectress of the Roman People,” the image may originate with St. Luke, and was likewise used as early as the 6th century in procession through Rome during a plague.  Also tastefully present in the square were an incense brazier and a simple platform and chair for the Pope to preside.

Intended and unintended enhancements to St. Peter’s Square for the event  – the deep blue hue from the special lighting that bathed the square, a driving rain, the approach of nightfall – also connected well with Cistercian intent in design for lighting and the permeability of nature to work their helpful effects into the contemplative mix at chapel.

Before uttering a word, the image of Pope Francis spoke profoundly at that moment.  At 83 years old, with a labored gait and hint of shortened breath, he could be a stand-in for any monk at almost any monastery in the world these days.  (At Mepkin, the mean age for the monks is 78.)  At the same time and for the same qualities, he was also a poignant global symbol of the person likely to feel the most lethal effects of the virus.

And yet, who could not be heartened as the Pope took up his message? Like a good abbot, he encouragingly emphasized the community aspect of the pandemic: “We have realized that we are on the same boat, all of us fragile and disoriented, but at the same time important and needed, all of called to row together, each of us in need of comforting the other.”

At the same time, addressing God but challenging us, the Pope also stated: “It is not the time of your judgment, but of our judgment: a time to choose what matters and what passes away, a time to separate what is necessary from what is not. It is a time to get our lives back on track with regard to you, Lord, and to others.”

A pope has many titles: Vicar of Christ, Supreme Pontiff, Bishop of Rome, Servant of the Servants of God, just to name a few.  For one hour, at least, Pope Francis could also be experienced as Abbot Primate of the world order.  You’d get no argument from that from the monks of Mepkin.

” It’s a fine thing to be alive. It’s an even finer thing to understand what the gift of one’s life is for.”

Thoughts from the Vocation Director