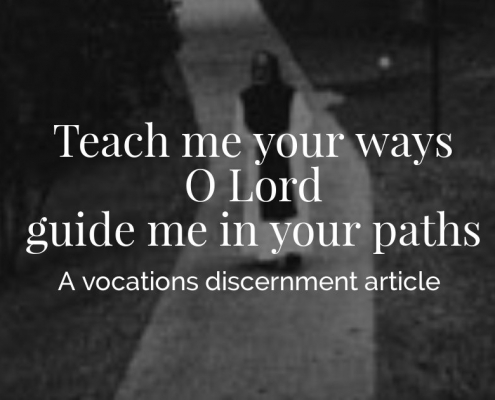 The attentive ear, receptive heart and open mind of a believer are essential to discover that God is calling someone to a particular path or vocation.  God calls each of us by name in baptism.  Each of us has a share in building up the church – weak and frail as our church may be at times.  Faith places us in a dynamic relationship with God who is taking us where we have not yet been.  And in the lives of God’s holy ones this may mean in a direction we might not yet have considered.

When the Holy Father invited all the men and women who are novices preparing for vowed religious life to come to the mass he was offering at the Basilica of the Immaculate Conception in Washington, DC, Abbot Stan gave permission for our men in formation and me to travel to the capitol of our country and be present for this profound opportunity.  Not wanting to stay at a hotel, a religious community with a house of studies, the LaSallette Fathers, were kind enough to provide us with accommodations.

Leaving Mepkin at 4 AM, we arrived at the house of studies at 4 PM and received a warm welcome.  It was when I walked into the living room that I was welcomed by five priests watching the Holy Father’s arrival at the airport on the television.  A wonderful surprise was to be enthusiastically greeted by one of these five priests, who looked at me and said, “Father Kevin?”  He had been an altar server in the the second parish where I had been assigned when I served as a parish priest.  An excellent athlete, he progressed to representing the United States at the Olympics in his sport.  A scholar as well as athlete, his life was rich and good and he met and became engaged to a wonderful woman.  But the awareness came that God was inviting him to surrender those possibilities and he responded to a call to priesthood.  And he now serves as the vocation director for his diocese.

Clearly God was redirecting this generous man of faith.  And I offer the story to invite those who are willing to take up that deeper conversation with God which asks not only “what do I want to do,” but “what is God inviting me to do in my life?”

For the church to be strong we need faith-filled married people, faith-filled single people, faith-filled diocesan priests, faith-filled religious sisters and brothers generously fulfilling roles of apostolic service. The church also needs folks who are willing to come apart and live the call to contemplative monastic life.  A discerner deliberately engages with God to learn where God may be inviting me to go.  Let’s pray for those discerning their call.

Some suggested readings on monastic life

As many of you know we eat our meals in silence and have reading during the noon meal.  We have recently finished Father Michael Casey’s wonderful book Grace on the Journey to God.   As one commentator says:

Benedictine monastic spirituality has emerged as an antidote to the spiritual and cultural challenges facing people of faith today. In this book, the author focuses specifically on GRACE, and the benevolence of God as it expresses itself in many different ways along our spiritual journey. What is a person likely to experience when beginning to give up him or herself conscientiously to the spiritual journey?  In this beautiful guide, gradually, we come to realize that everything that happens in our lives is somehow the gift of our loving Father.  Every journey is ultimately individual. As Casey explains, what you hear within your own spirit is more significant than what he can say. But his aim is to help you listen to the voice of God in your heart.

Michael Casey, OCSO, has been a monk of Tarrawarra Abbey, Australia, since 1960. After completing a degree in Scripture at Leuven, he received his doctorate from Melbourne College of Divinity for a study of desire for God in the writings of Bernard of Clairvaux. For the past decades he has been engaged in exploring different aspects of monastic spirituality, writing, and giving conferences throughout the English-speaking monastic world. His books include Strangers to the City and The Road to Eternal Life.

In the March 2018 issue of the American Benedictine Review, you will find a piece by Sister Manuela Schema, OSB entitled: “To go away and still be like a tree; Departures in the Life of Benedict.”  Noting that the bible is a book of beginnings, Sister Manuela speaks to our reality that life brings us into the paradox that nothing really proceeds unless it begins at the same time.  God is in every beginning.  In every beginning the wonder of creation is repeated.  God is the one who continually gives a new beginning, in the life of a person, a family, a monastic community.  Drawing upon the second book of the “Dialogues” by Saint Gregory the Great, Sister Manuela shows Benedict’s life as a succession of departures and breakings-off, as a way that lead from beginning to ever new beginning to final departure.  And this becomes a backdrop to reflect on the reality of monastic life today.  “Monasticism is more about being on exodus than dwelling at home.  Monks and nuns today are also called to stand before God like strong trees and especially before the final challenge, the exodus of death.  The basic task of Benedictine monastic communities is not self-preservation but to stand the test.  Shoot so monastic life will spring up anew in different times and places because at all times people respond to the call of God to seek him and to set out on his path under the guidance of the gospel.”

Sister Manuela Scheiba, OSB is a member of the Abbey of Saint Gertrud at Alexanderdorf, Germany. (She entered when this was East Germany before the wall came down.)  She teaches at the Monastic Institute at Sant’ Anselmo, Rome, Italy.