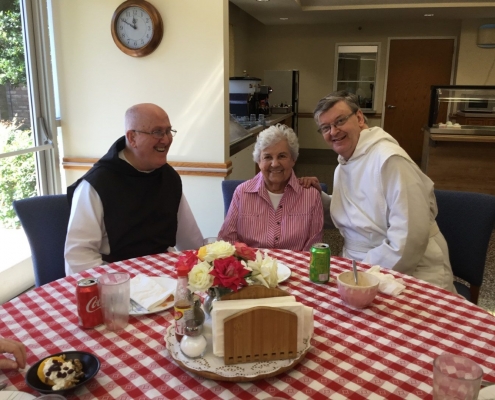 Father Columba, accompanied by Father Kevin, novice director, went to Belmont, N.C. where he took a course in the Canon Law of religious life. The course was conducted by Mercy Sister Jeanne Margaret, who is a Canon Lawyer. Over a period of four days, they covered Consecrated Life, Religious Institutes, Governance, Formation and Vows, the Common Life, the Apostolate, and Separation from Institute. Many of the monks of Mepkin have previously attended this course. Father Columba found Sister Jeanne Margaret to be a wonderful teacher with a very direct and engaging style.

On their second evening there, Father Kevin and Father Columba were invited by the Benedictines of Belmont Abbey to visit. They were greeted by Father Elias, who gave them a tour of the monastery. They then prayed Vespers with the monks and joined them for dinner afterwards. The visit continued with attendance at Compline and recreation. The abbey has a number of new members, and they also have several in formation from other monasteries. Both Father Kevin and Father Columba thoroughly enjoyed their visit to Belmont Abbey.

The next evening, the coordinator of the Mercy Sisters in Belmont, Sister Lee Ann, treated the two monks and Sister Jeanne Margaret to a lovely dinner out. They celebrated Sister Lee Ann’s pilgrimage to Ireland, set to begin the next day. She had much to talk about with Father Columba, who came to Mepkin from Ireland.

On the final morning of the program, there was an opportunity to see some of the works of the Mercy Sisters and their staff on their campus. Father Columba was given a guided tour of Holy Angels, which is a home for children and adults with developmental and intellectual disabilities as well as those with delicate medical conditions. They provide lifelong round the clock care, and it is a place of much love.

The Mepkin monks are very grateful for the hospitality of the Mercy Sisters and the teaching skills of Sister Jeanne Margaret. For Father Columba, it was a wonderful experience.